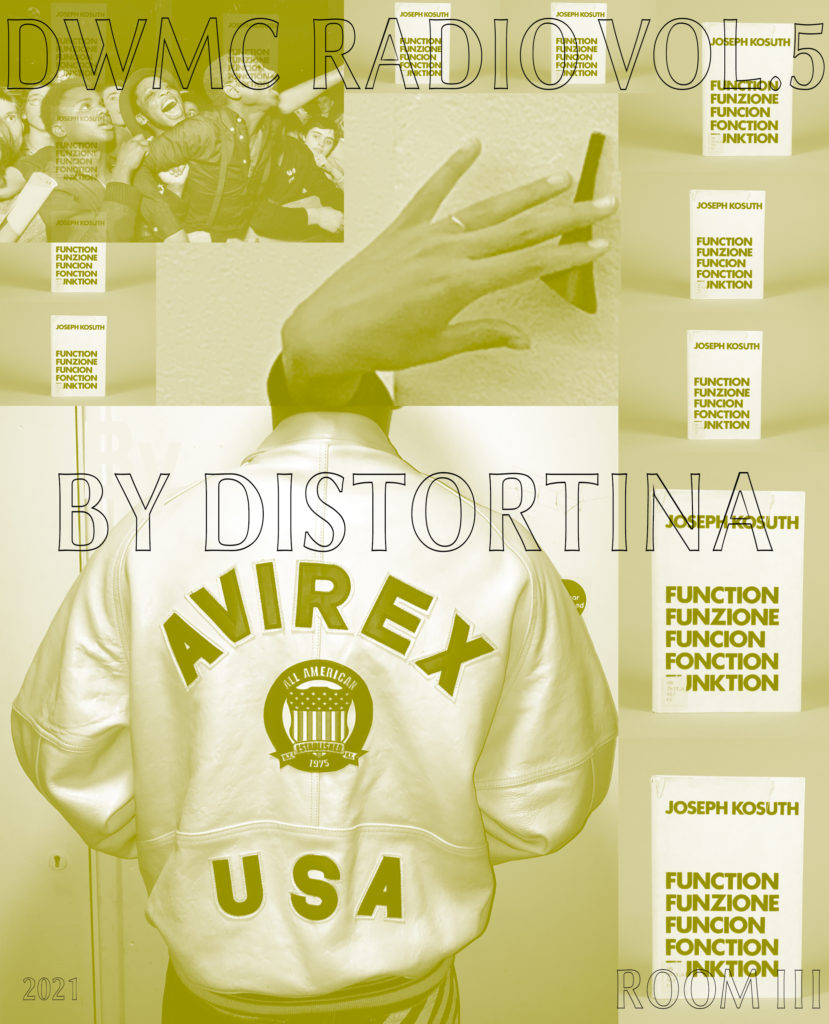 Up and Down the Heels: DWMC Performative Display

Broken heels found in Ghana by JOJO GRONOSTAY fell off shoes sent from Europe and ended up in the hands of Anna Franceschini’s performers. Up, rather than down, dislocating the distance between our feet and the ground, us and this planet to the walls, the necks, the knees. The space breaths, the heels fall down. They will inhabit the space where they fell, like clothes fallen on the floor a moment before making love, like water filling a pond after spinning counterwise at the other end of the planet. – Chiara Vecchiarelli 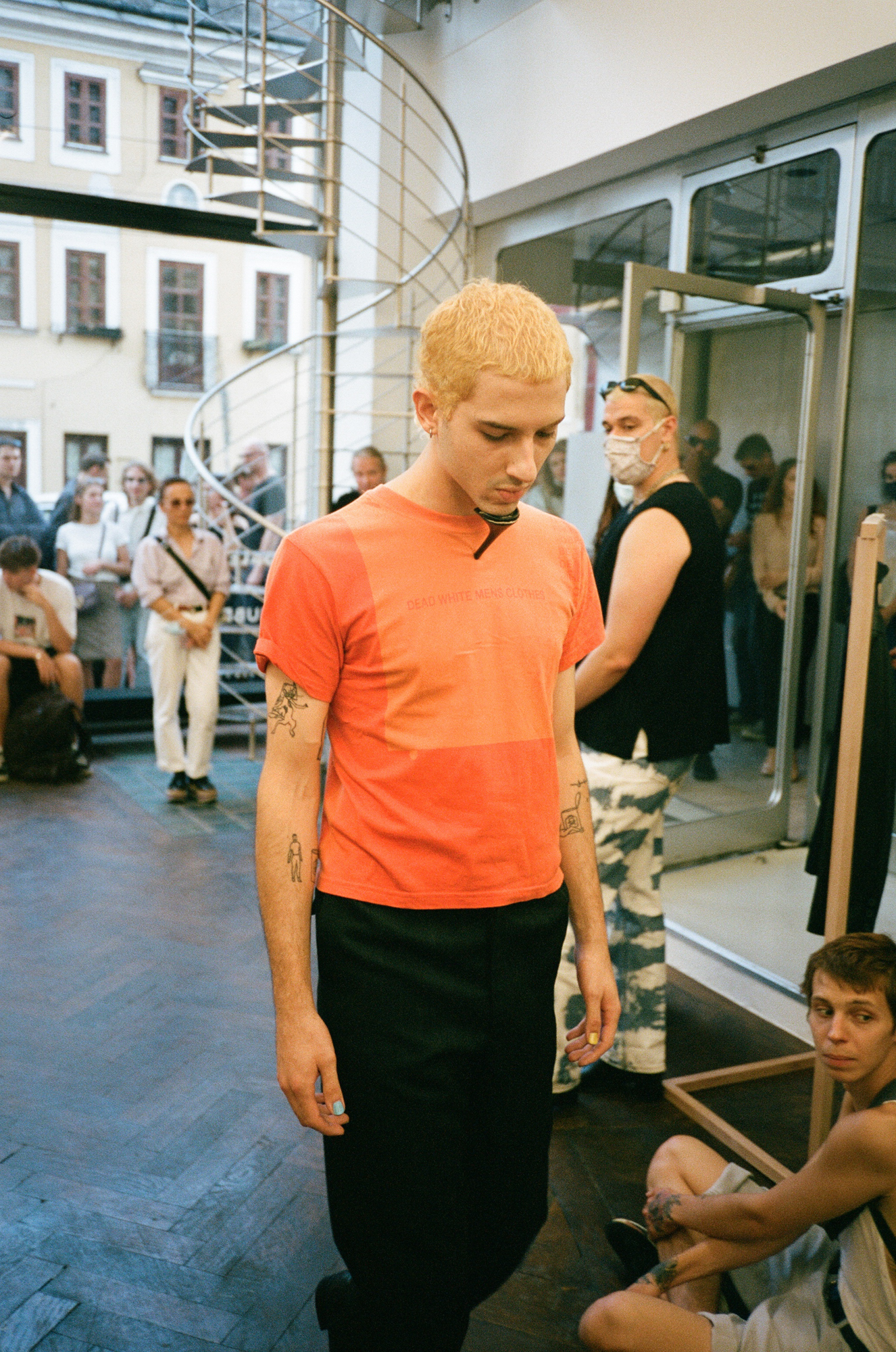 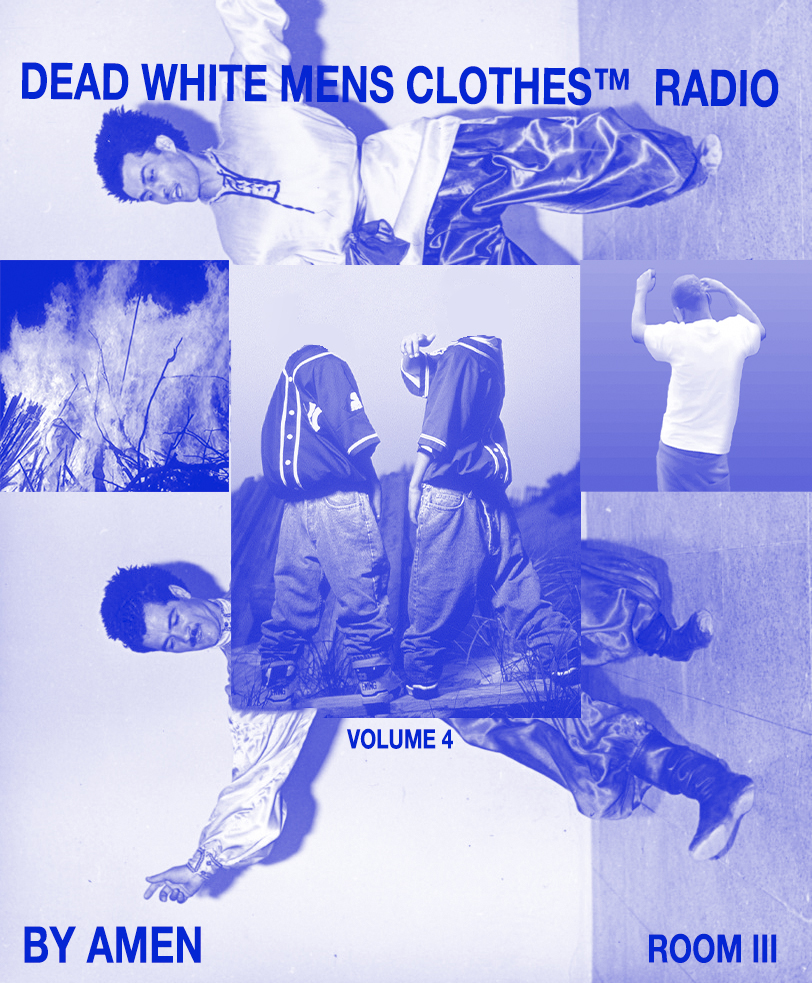 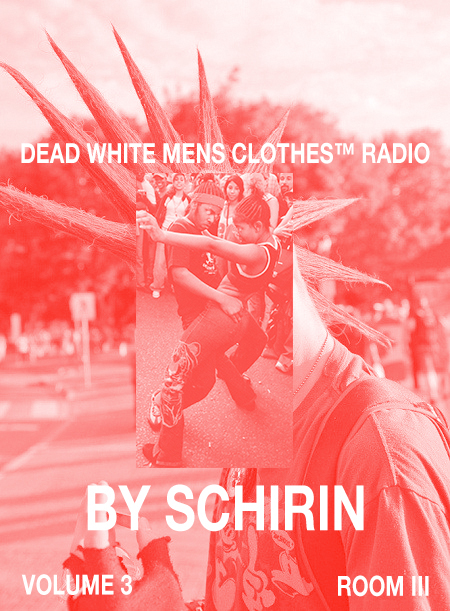 Ups and downs of a flipped planet: curated by Chiara Vecchiarelli 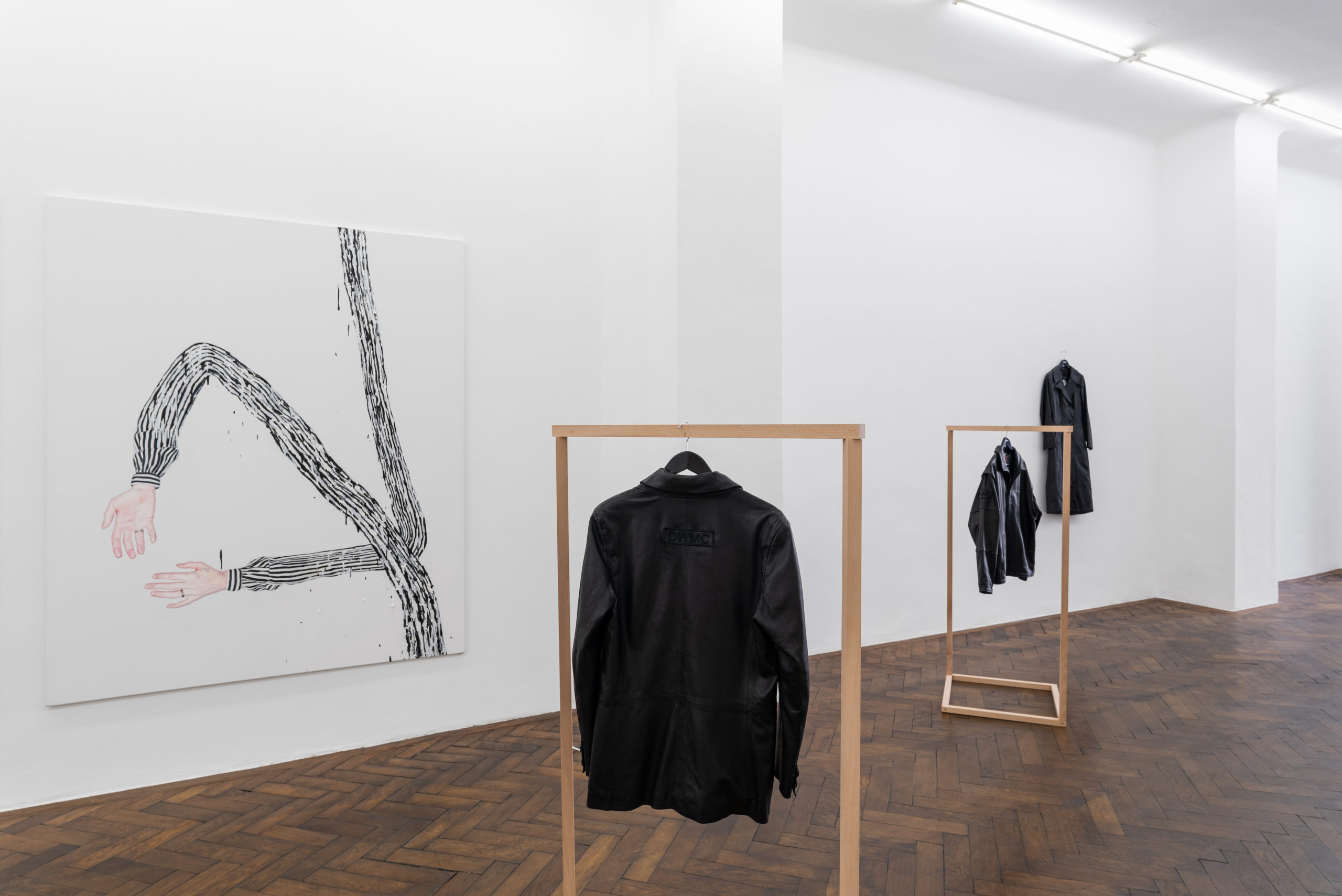 Ancient philosophers held the earth to be spherical. Before it was flattened by prejudice, before the Copernican revolution decentered it, our planet stood at the centre of the universe in a system made of spheres englobing one another. Little was known about the other side of the sphere when its name was found: with the term “antipodes”, from the ancient Greek ἀντίπους – opposite foot – a region of the world was named in which people, rightly so, were believed to stand with the feet opposite, as if reflected in a mirror. Over time the word shifted in meaning and the people of the other side, that nobody had ever seen, started to be depicted with inverted feet―either pointing opposite to the body or growing out of the head. A figure for the prejudice against that which is opposed and therefore potentially dissimilar, antipodes became the name for all that stands conceptually below. However, it was precisely to criticise the notions of above and below that more than two millenniums ago Plato first employed the term ἀντίπους: if we were to walk across the globe, the philosopher wrote in the Timaeus, our feet would be both above and below, and it would hence make no sense to use terms implying opposition to describe a place that is both up and down.

The relationship that defines us, according to the philosopher, is not to a privileged point of the surface but to the core: there is no more below or above when we understand that we are all equidistant from the centre. No matter where we live, the language we speak, our social status or physical connotations gravity pulls us all towards a same centre, and yet in our minds we tend to function according to simple parameters such as high and low, in and out, up and down, often forgetful of their relativity as well as their mutual inclusiveness. Ups and Downs of the Flipping Planetaddresses the cultural construction of our ups and downs to suggest, thought the artworks on view, a flipping of perspective.

In this spirit Iván Argote (Bogotà, 1983) conceived his sculptures Antipodos. Human figures showing inverted feet, they were inspired by the 1493 Liber Chronicarum (Book of Chronicles, also known as Nuremberg Chronicle). An illustrated encyclopedia presenting a history of the world, the publication filled with imagination its gaps in knowledge, presenting the inhabitants of unknown lands with all sort of deformities, including the coexistence of male and female sexual connotations in a same body divided in two halves, and feet pointing backwards. Walking, sitting and laying down, these sculptures alter the perception of space not unlike water spinning unostensibly counterclockwise in the Southern hemisphere, hinting at a potential shift of direction as they make tangible the prejudice they turn over.

The same direction that Jojo Gronostay flipped when he created his brand DWMC operating on the threshold between art and fashion. The project appropriated the Ghanian expression Obroni Wawu (‚Dead white men’s clothes‘) by which in the 1970s locals called the second-hand clothes arriving from the other hemisphere: so high was the quality of the clothing they would not believe they were just be given away for free, and assumed that the previous owner must have died. An art platform and a brand making use of second-hand clothes and dead stocks, DWMC that operates in Europe as it supports Ghanian design, whose development had been prevented by the arrival of second-hand clothes sent as charity by Europe.

And hands collaborate literally on Eliza Douglas’(New York, 1984) chimeric paintings, for which a first hand paints realistically what the artist cannot and a second hand, her own, adds more gesturally a limb or a piece of clothing. Only present through its extremities, in Douglas’ paintings the body bends and expands as if aiming at those places where above and below are just the same, its centre of gravity remaining unpainted. As if one’s life was a chimera whose centre belongs to nobody, not even to oneself, hands and feet connect directly in one of her work, skipping the centre. I Am All Soul, reads its title. Perhaps, because our soul is where everything flips. 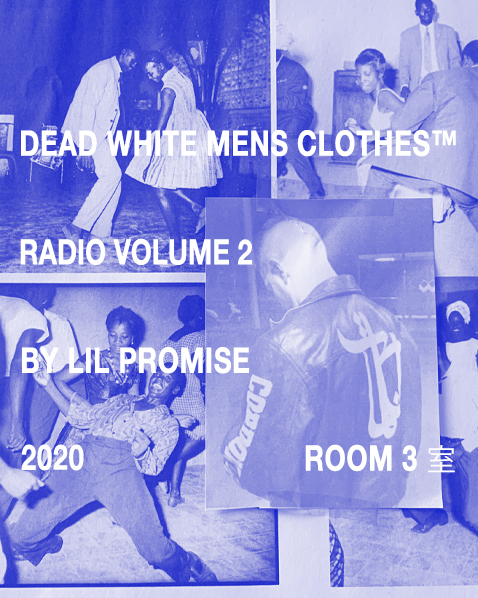 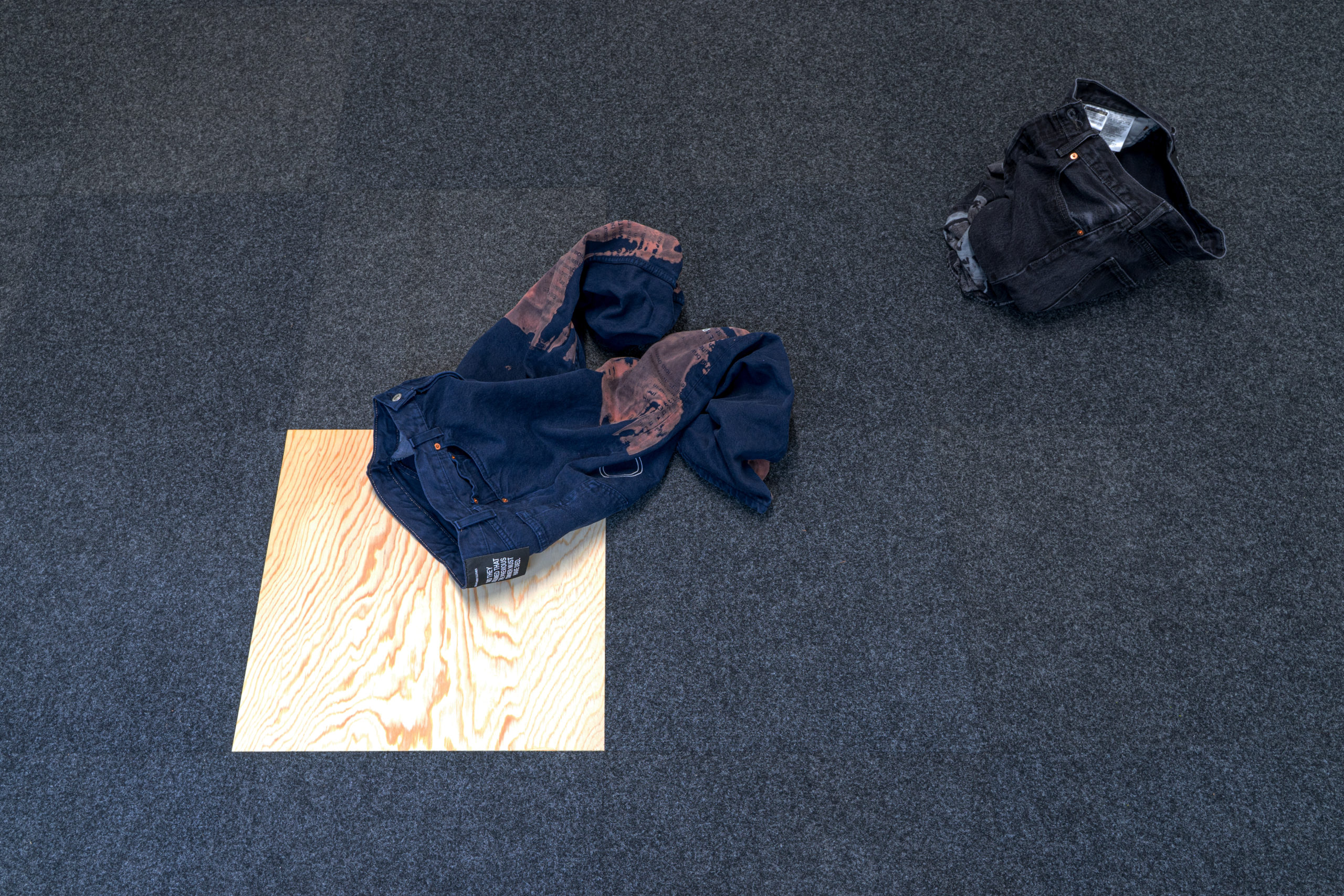 I wanted to create a platform or display that could also function as a work of its own. The old synthetic felt carpet tiles don’t have the characteristics of antiques because they are functional and too new. It is a serial object but got to authenticity through its used condition. The synthetic panels will still work long after my death, at least that’s what the salesman told me. Because of their former placement, the sun, dirt, different use and people walking over it, there are color differences between the panels. I like the idea that the carpet is an assemblage from former interiors of banks and insurance branches that have disappeared in the course of digitalization. Although the synthetic felt panels look neutral they are very specific for certain commercial spaces. The pieces of pine wood for the floor have been cut from leftovers. The material, felt and wood, could be linked to Joseph Beuys work and the idea of the social sculpture, but this time with a “commercial“ coating.

The edited pictures on the walls were photographed by me in Barcelona in 2020. I was very interested in the hands of the street vendors, because they reminded me of gestures in old paintings. In their hands they hold ropes that are connected to blankets that serve as displays for their products, mostly fake designer goods. The ropes are a device to pack things as quickly as possible in order to escape from the police. The hand is the complex and primary human tool. With it we manipulate our environment, shape nature into culture, and fulfill our creative mission. Just like an artist, the vendor is a trafficker of ideas. His product is an idea of luxury.

believe that such high quality clothing could be given away for free and assumed that the previous owner must have died.

When I started the project in 2017, I made a clothing collection out of used clothes that I found on the Kantamanto Market in Accra Ghana and brought it back into the western context. DWMC should ask questions about neocolonialism, identity and our value system. The project was also an opportunity for me to get to know my Ghanaian family better. My mother is German and my father is from Ghana. I grew up with my mother, which is why I felt a little alien to West African culture for a long time.

I used to think art should always stand for itself and not have an agenda. That the uselessness of it is something beautiful. DWMC made me think a little differently about it. I believe it is due to its form as a clothing brand and its appearance in different contexts. Nowadays, a brand should stand for something good, in the best case even be an initiator for social change. So could DWMC be seen as a social sculpture or is it a disguised version of rag picking? Maybe even both? A ragpicker, like Adorno views it, is an ambiguous figure „between recycling entrepreneur and drunken waster, conservative capitalist and subversive outcast.“ On the one hand rag-picking is a way to save the ecological damage and resources, but it could also be seen as the ultimate form of capitalism, wringing the last drop of exchange value from material that seems already exhausted.*

Mary Douglas examined in her book Purity and Danger “Dirt can only be dirt when there is a system. Dirt is the byproduct of a systematic ordering and classification of matter, in so far as ordering involves rejecting inappropriate elements. This idea of dirt takes us straight into the field of symbolism and promises a link up-with more obviously symbolic systems of purity”. 30 000 second-hand sellers and 500 million used clothes are located at Kantamanto. Here the categorization between dirt and non dirt are rather complicated to classify. There is so much excess of  clothing at Kantamanto, that when it rains the retailers and importers begin throwing clothing on to the walkways to soak up the mud, so in parts of the market walking feels shaky. It took me a while to realize that I was walking on earth-colored clothes. 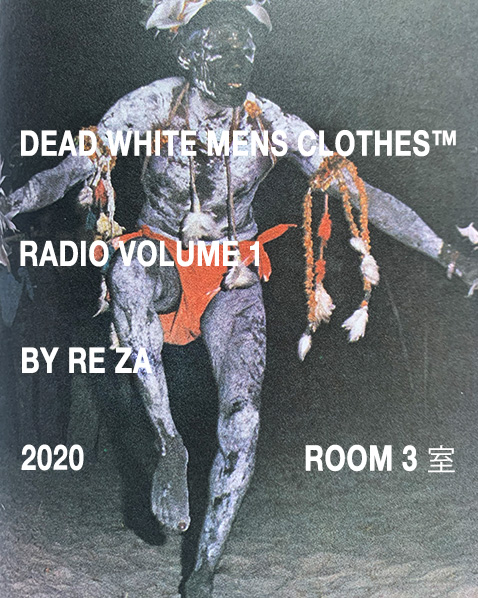 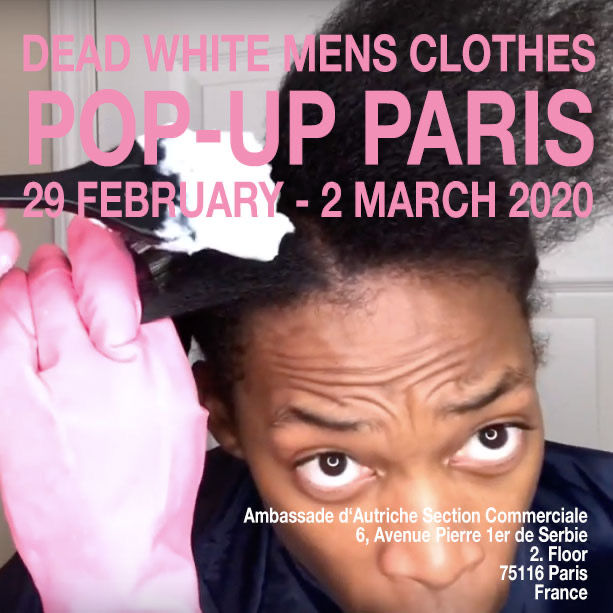 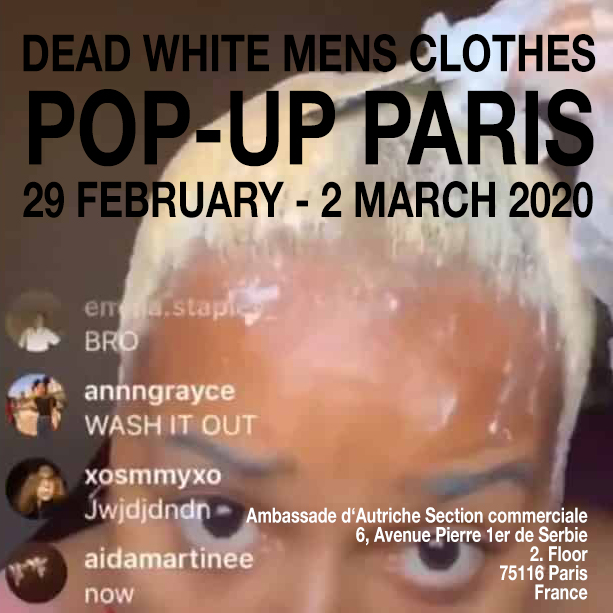 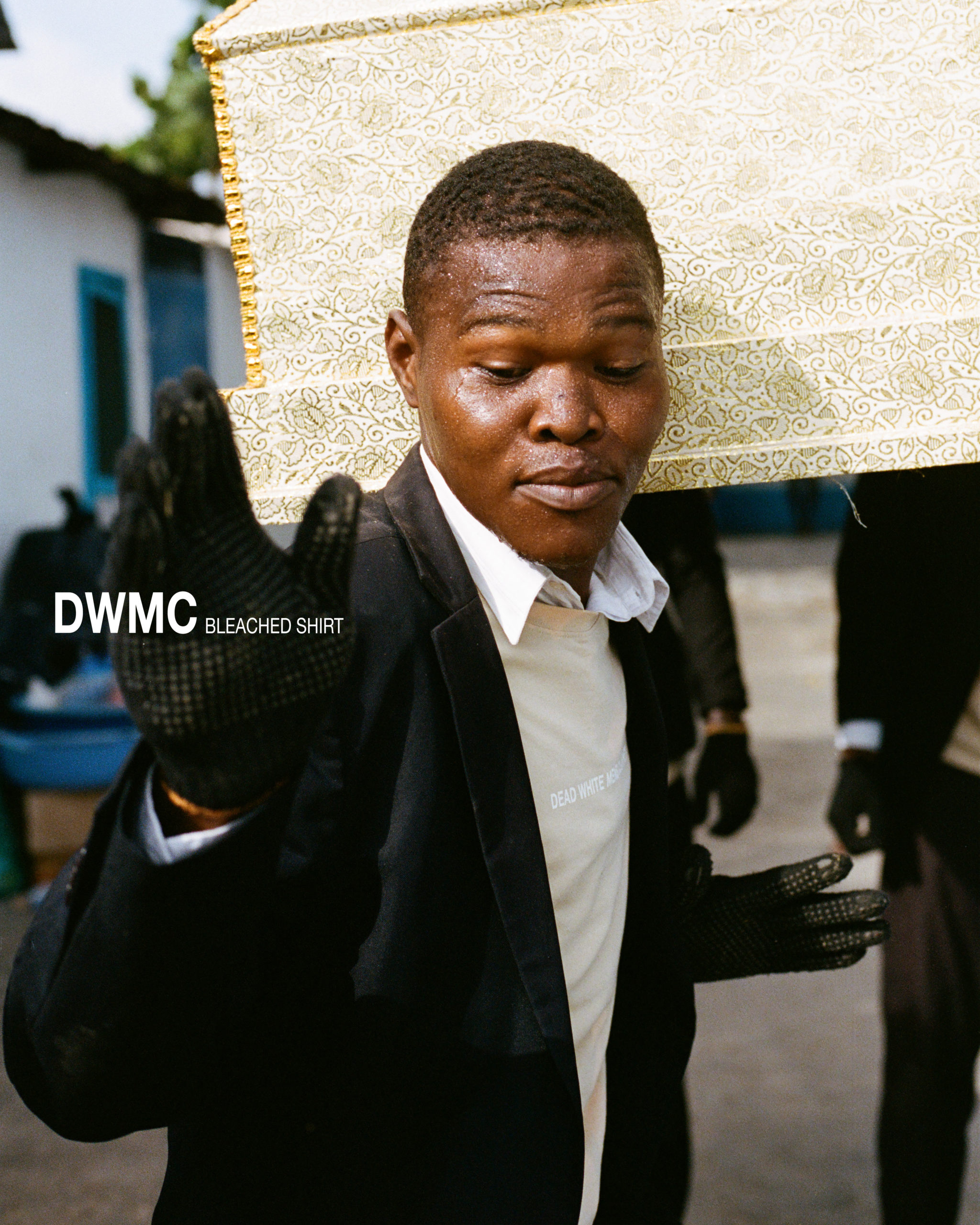 The belief that death is the gateway to eternal life is deeply rooted in West Africa. Funerals are one of the most important social events. Ghana’s dancing pallbearers bring funerals joy. Daniel Gebhart de Koekkoek photographed the coffin dancers for DWMC in Accra, Ghana. Concept by Jojo Gronostay

The new exhibition will center around the theme of hair and body bleaching. A topic that is closely linked to identity.

All of the screen-printing for the new clothes are made with hair and body-bleaching products.

*non of the products will be harmful for the skin. 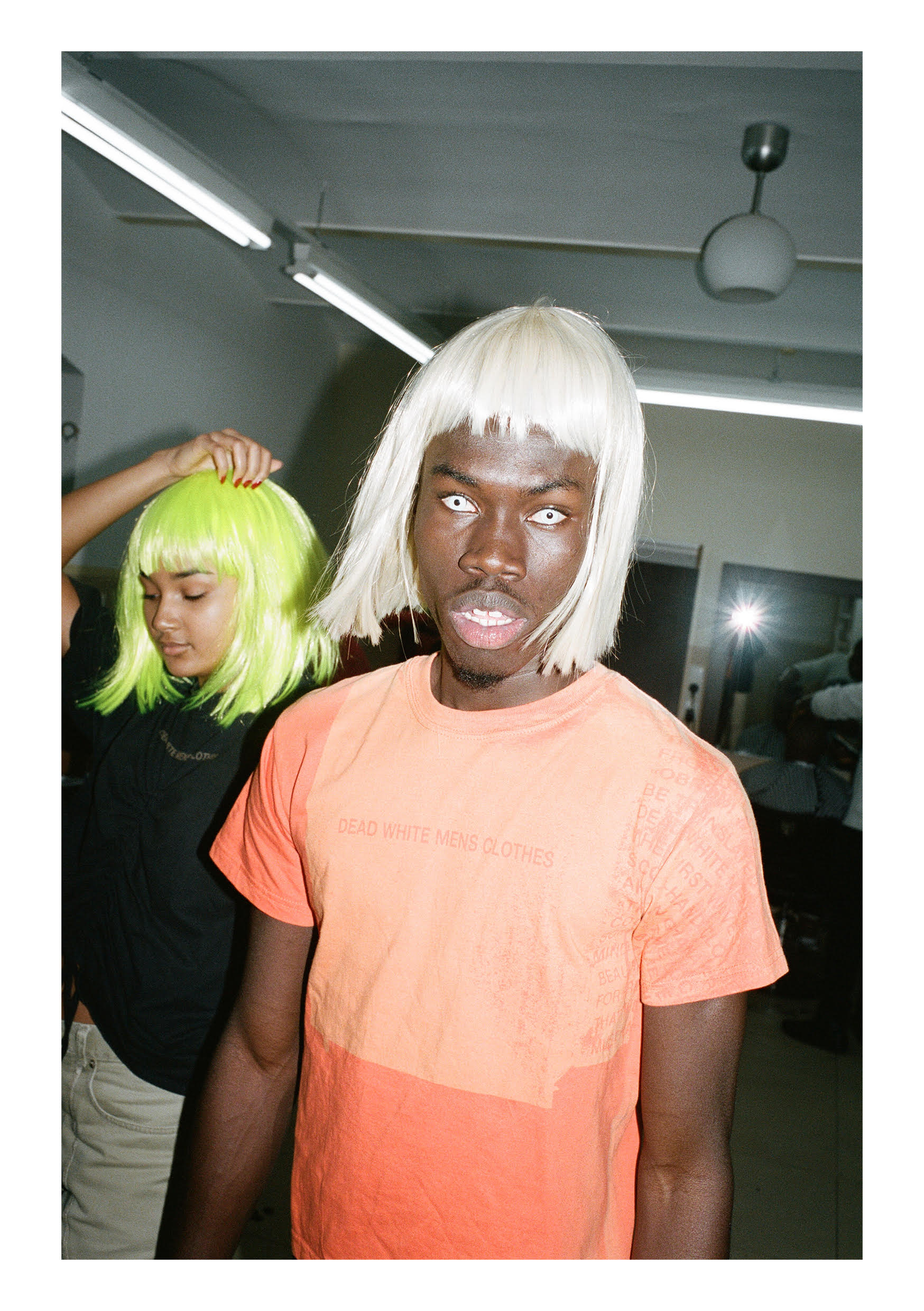 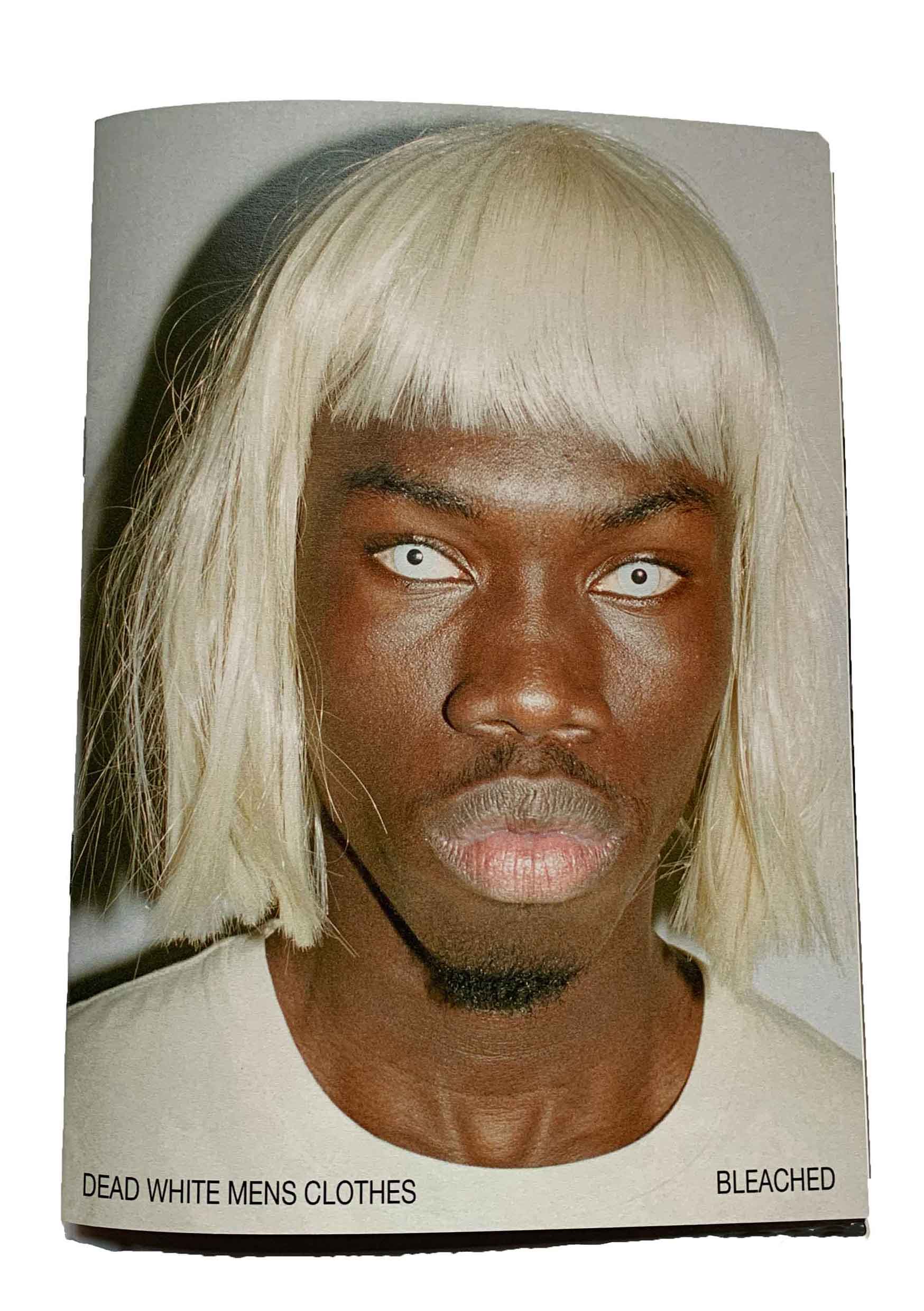